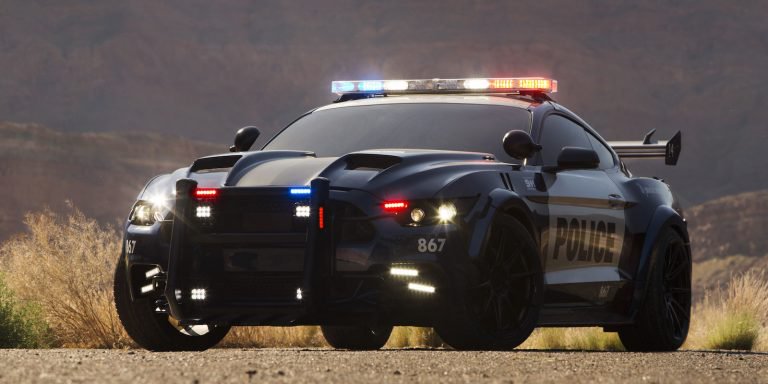 Ford Mustang Will Play Role of Bad Cop in Transformers 5

Whether you are a fan of iconic American sports cars or giant robots, some really great news came out this week for those of us who love the Ford Mustang. Though it won’t be exactly the same model you can buy at your local Wichita Ford dealership, a Ford Mustang will once again be the vehicle mode for the Decepticon “Barricade” in the upcoming Transformers 5 movie.

While Barricade was represented as a fifth-generation Mustang in 2007’s Transformers, this bad cop will be a sixth-gen ‘Stang in Transformers: The Last Night in the summer of 2017. You will certainly recognize the pony car’s signature look … however, there will be a few over-the-top features like large hood vents and scoops, blacked-out headlights, an aggressive bull bar upfront and an exaggerated rear spoiler/wing. Oh, and of course he will have the slogan “To Punish and Enslave” on the rear fenders as a major hint that this is not your run-of-the-mill squad car.

If seeing this image makes you want to be driving this classic pony car, then Rusty Eck Ford has a great selection of 2016 Ford Mustang models just waiting to “protect and serve” your needs. As in, your need for style.

The Ford Mustang received a significant update to its look last year, and now sports a redesigned front grille with a wider opening and a hood that has just a tad bit more curves than previous years. The rear of the 2016 Ford Mustang is wider and the stance is lower, which means the new ‘Stang is rocking a more muscular profile these days. Sorry, it is not likely to transform into a robot from outer space … but it certainly will get you plenty of long stares and second looks!

Ah, but don’t fret is your a long-time Mustang enthusiast. The 2016 Mustang from Wichita Ford dealers is still the car that you fell in love with when you were a kid. Beneath the hood, it is better than ever as the 2016 Mustang’s heart and soul — it’s powerful engine — is alive and well. And, even improved.

The standard 3.7-liter V6 that comes on the base models boasts 300 horsepower, while a turbocharged 2.3-liter 4-cylinder with EcoBoost is a step up to smarter and more efficient power with it’s 310 hp. For ultimate power and thrills, the 2016 Ford Mustang is also available with an improved 5.0-liter V8 engine that will roar down the road with 435 hp.

So what are you waiting for? Visit Rusty Eck Ford in Wichita today and test drive a 2016 Ford Mustang and see how the past and the present are perfectly blended into another iconic sports car. One that is cool enough to be considered one of the Hollywood greats!