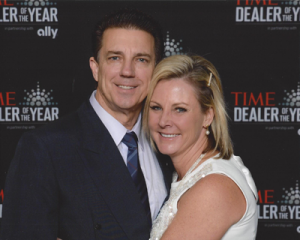 A native of Kansas, Les Eck was raised around the environment of his family’s Ford dealership. Les Eck attended Haven High School before relocating to Wichita, Kansas to earn a business degree from Wichita State University. In his early twenties and thirties, he managed and owned a Ford Lincoln Mercury dealership in Leavenworth, Kansas. His future would be one of success in business, high regard in the car industry, and full of sterling community involvement.

Les Eck is generous to those in need, be it charities or schools, and has not forgotten where he came from. Eck is a diamond sponsor for Susan G. Komen Race for the Cure in Wichita. He’s also the founder of Adopt-A-School, a nonprofit program that raises cash for classroom supplies and school district needs throughout Kansas.

More can be read about his positive attitude and local contributions here.

Unprecedented Success in the Automotive Industry

Les’s journey to the ownership of his dealership and success was not straightforward or simply inherited. In 1983, Eck returned to the greater Wichita area and began several small business ventures and started a family. It wasn’t until 1997 that he purchased Rusty Eck Ford and began to grow and diversify the family business.

In 1997, Eck acquired Rusty Eck Ford from his father. Since then he has advanced the car dealership business by utilizing the newest technology and most up to date facilities in the industry. At the newest facility, built in 2005, car buyers can find a functional, customer service-conducive environment and an incomparable vehicle inventory.

The Eck Complex also includes the Quick Lane. The Quick Lane offers service on all makes and models with no appointment necessary. This service facility was built in 2000 and underwent a facelift in 2011, making it a wider, more comfortable environment.

As the world goes green…so does Rusty Eck Ford. The facility burns the waste oil from the service departments to heat the buildings. It is an environmentally friendly way to dispose of the oil and conserve natural resources.

Now Les Eck has a hand in managing six different car dealerships throughout Kansas and Missouri.

The Adopt-a-School Initiative and Charity Work

As was touched on above, his success as a businessman is not the only way Les Eck stands out. He and his wife Pam Eck began the Adopt-A-School initiative in 2002, to come to the aid of students and teachers. This program has grown every year with more and more nonprofits contributing and raising or donating funds.

Each year, Les Eck donates a car to a lucky winner: any nonprofit organization, school, church, group, or charity that has signed up to sell Adopt-A-School raffle tickets. The winner gets their pick of any vehicle from a participating dealership valued up to $25,000.