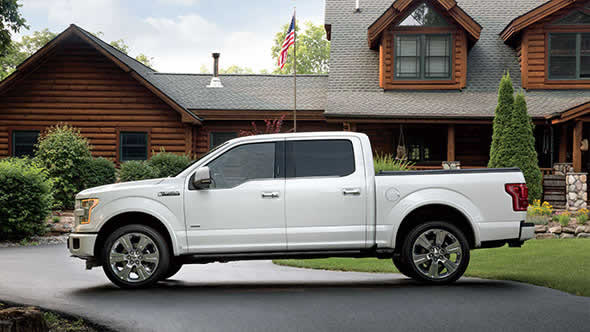 The 2016 Ford F150 continues to dominate the full-size truck sector with it’s new lighter, military-grade aluminum shell that boosts the fuel efficiency to the head of the class. However, did you know that the country’s best-selling truck for more than two decades now heads the class in safety? Well, it is true — the latest F-150 from your local Wichita Ford dealership has added a new level of safety and technology that make it the safest truck on the market.

The 2016 Ford F-150 from Rusty Eck Ford recently received a 5-Star Crash Test Rating from the National Highway Traffic Safety Administration (NHTSA). In addition, it also was named the Top Safety Pick from the Insurance Institute for Highway Safety (IIHS).

Protecting you and your passengers begins with a sturdy backbone made of high-strength steel. A fully boxed frame with eight crossmembers is one of the main reasons we call it “Built Ford Tough.”

Combined with reinforced metal within side panels and other key parts, the 2016 F150 proudly earned the 5-Star overall crash test rating from the NHTSA.

Available features like Forward Collision Warning and an advanced restraint system with dual-stage airbags ensured that this truck provides the ultimate protection and catapulted the 2016 Ford F150 to the Top Safety Pick.

The list of safety features is impressive and long. A few of the other features that work hard for your protection and safety every time you drive your F150 from Wichita Ford dealers include:

So what are you waiting for? Visit Rusty Eck Ford in Wichita today and test drive the best-selling truck in America. After all, the 2016 Ford F150 is now the safest truck on the road.