Model Overview
The 2015 Hyundai Tucson comes in three trims: the base-model GLS, the SE and the Limited. The GLS is powered by a 2.0L 4-cylinder that delivers 164 horsepower and 151 ft-lb of torque. The Tucson SE and Limited, meanwhile, utilize a 2.4L 4-cylinder rated at 182 horsepower and 177 ft-lb of torque. Both engines have gasoline direct injection and continuously variable camshaft timing for responsiveness, without giving up efficiency. Hyundai has saved a lot of weight in the Tucson's body by using high-strength steel. Fuel economy ratings that were previously best-in-class are further improved thanks to the Active ECO System, which modifies engine and transmission controls to smooth throttle response. All Tucsons feature a 6-speed automatic transmission with SHIFTRONIC manual control, which has very smooth shifts while downshifting responsively.
Front-wheel drive is standard on the Tucson, though all-wheel drive is available on all models. The system sends power only to the front wheels in normal driving but sends more to the back as needed. It also has a 50/50 lock mode, which is ideal for slippery conditions such as snow or mud.

The Tucson has an absorbent ride and a quiet, refined interior feel, thanks to standard SACHS amplitude selective dampers and suspension arrangement that uses stabilizer bars front and back. Meanwhile, the electric power steering system varies its effort for various vehicle speeds and helps save fuel. The Tucson's turning circle of 34.7 feet is the best in its class, according to Hyundai.

Hyundai has, just as with its other vehicles, piled on the standard safety features. The list includes electronic stability control, anti-lock brakes, Hillstart Assist Control and Downhill Brake Control for confidence on slippery slopes, front active head restraints, and a total of six airbags with both front side and full-length side-curtain airbags.

While the Tucson isn't much larger than other compact crossovers, its long wheelbase pays off with an especially roomy interior. The rear seat is quite spacious, with enough legroom for adults, and the front seats have additional seat track to accommodate tall drivers. Back seats are 60/40 split fold-down and include a two-stage reclining function. When folded forward, they lay flat for a large cargo area, and the Tucson has lots of smaller cubbies and compartments for everything from sunglasses to extra drinks. 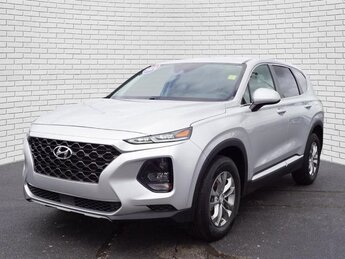 2016 Chevrolet Equinox LT
Black
* All prices listed plus tax and applicable fees. While we make every effort to ensure the data listed here is correct, there may be instances where some of the factory rebates, incentives, options or vehicle features may be listed incorrectly as we get data from multiple data sources. PLEASE MAKE SURE to confirm the details of this vehicle (such as what factory rebates you may or may not qualify for) with the dealer to ensure its accuracy. Dealer cannot be held liable for data that is listed incorrectly.
Close
Close
© 2021 Rusty Eck Ford | Privacy Policy
Much from Remora
Send Now
Close
Share Search Results